Today is Jackie Robinson Day.  A day celebrated in major league baseball stadiums across our land.  A celebration that I’ve seen little hoopla about, just some passing mentions.  I don’t think anyone is ignoring it for any nefarious reason, it is tax day after all…and Tiger did win the Masters, and Notre Dame Cathedral is burning.

I wrote this piece a couple of years ago as part of a celebration for Black History Month and decided to rewrite it in honor of Jackie Robinson…and Pee Wee Reese.

Athletics in general and baseball specifically have played a very important part of my life. I coached at the middle or high school level for forty-five years, thirty-six coaching baseball, all forty-five coaching kids.

I began my coaching career at the end of segregation and the beginning of integration in the South.  The opposition to black and white kids going to school together was still high but in athletic locker rooms around the South, young people figured out a way around their prejudices…at least for a few hours daily.

I have very strong opinions about the state of race and bigotry in the United States and am sure professional baseball locker rooms of today are no different than the general population of today.  What is different, they find a way to overcome it, a way to make it work…kind of like Jackie and Pee Wee.  From two years ago….

“I do not care if the guy is yellow or black, or if he has stripes like a fuckin’ zebra. I’m the manager of this team, and I say he plays. What’s more, I say he can make us all rich. And if any of you can’t use the money, I will see that you are all traded.”  A short speech by Leo “the lip” Durocher, manager of the 1947 Brooklyn Dodgers, letting his team know that Jackie Robinson was in the big leagues to stay…with or without them.  I’m sure Leo said more, he was, after all, a man of many words…many “colorful” words.

April 15, 1947, Jackie Robinson became the first African-American to break the major league baseball “color line” since the 1880s.  The “color line” was a “gentleman’s agreement” among major league owners to not allow Blacks to play.  Branch Rickey, the Brooklyn Dodger owner, would scuttle the “gentleman’s agreement” signing Jackie Robinson and putting him on the field.  I would be remiss not to mention that Larry Doby would be the line breaker in the American League with the Cleveland Indians and for some reason flew under the media radar.

Normally a middle infielder, Robinson started at first base his first day in the “Bigs” because All-Star Eddie Stanky was playing second, and Pee Wee Reese was playing shortstop. While not getting a hit, he did walk and scored a run. Facing ALMOST universal racial prejudice, Jackie finished his initial season hitting .297 in one hundred and fifty-one games and received Rookie of the Year honors.  Not bad considering the weight of an entire race that he carried.

I was too young to care much about Jackie Robinson the player and his trials and tribulations.  I hadn’t even been born yet and when I was born, I wasn’t much of a Dodger fan…at least that is my excuse and I’m sticking to it.  Much later, the old newsreel films I watched incessantly proved him worthy of six all-star appearances, a league MVP award and an election to baseball’s Hall of Fame.

Today I celebrate the way he revolutionized the game and the trail he blazed for the stars of my own youth and for those who followed. I cannot fathom what baseball might have been without the likes of Willie Mays, Willie McCovey, Bob Gibson, Hank Aaron, Ozzie Smith, Frank Robinson…you get the idea. There were a bunch of others.  Today I am also aware of his many trials and tribulations.

When I said almost universal prejudice there were a few opposing players and teammates who came to Robinson’s defense while offering him a hand in brotherhood. One of those men became an all-time favorite of mine as a broadcaster. He was Robinson’s former teammate and Dizzy Dean’s “Little Partnah”, Pee Wee Reese. Many of my youthful Saturdays were spent sitting with my father watching the Falstaff Game of the Week with Dizzy and Pee Wee bringing the play-by-play.

During the trailblazing 1947 season, Reese was quoted as saying, “You can hate a man for many reasons. Color is not one of them.” Pretty profound for a white guy from Kentucky in 1947. During the Dodgers first road trip as Robinson was being heckled during pre-game infield, Reese, the captain of the Dodgers, went over to Robinson.  Engaging him in conversation, Reese put his arm around Robinson’s shoulder in a gesture of support which silenced the crowd. An eight-foot bronze statue located at the minor league, Brooklyn Cyclones’ stadium commemorates that moment. A plaque states as follows:

“This monument honors Jackie Robinson and Pee Wee Reese: teammates, friends, and men of courage and conviction. Robinson broke the color barrier in Major League Baseball, Reese supported him, and together they made history. In May 1947, on Cincinnati’s Crosley Field, Robinson endured racist taunts, jeers, and death threats that would have broken the spirit of a lesser man. Reese, captain of the Brooklyn Dodgers, walked over to his teammate Robinson and stood by his side, silencing the taunts of the crowd. This simple gesture challenged prejudice and created a powerful and enduring friendship.” 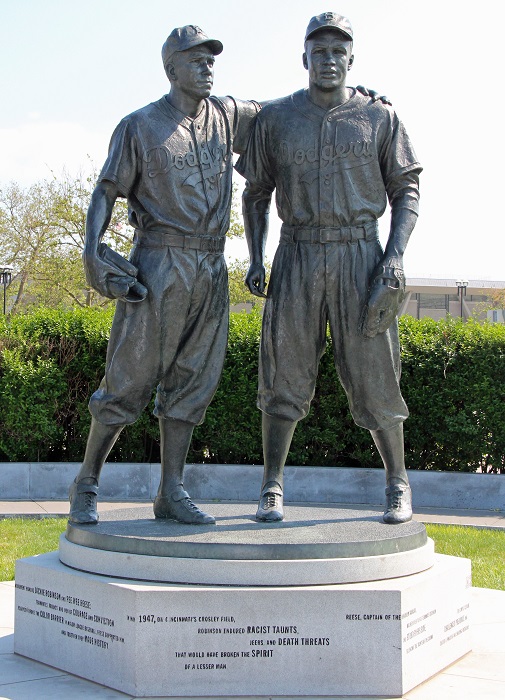 Don Miller writes on many varied subjects.  His author’s page may be accessed at https://www.amazon.com/Don-Miller/e/B018IT38GM

6 thoughts on “Jackie and Pee Wee”