I am happier, and usually saner, with the advent of spring and the end of winter than I am with the death of summer and fall.  Certain birds finding their way to my feeders that weren’t there a few weeks ago, the finches and mourning doves, the return of my Redtail Hawks. They came early this year.  The deer eating my privet, not eating enough privet, certain flowers blooming at certain times and my toad.

I first wrote about “The Toad in the Corner” a year or two ago, a huge American toad that has appeared outside my back door for years.  I found it comforting to see her having backed herself into a shady spot at the corner of my foundation and rock wall during the heat of the day.  Coming out to wreak havoc on the insect population at night, sitting on a flat rock, all fat and sassy.  Unconcerned about my entrance into her realm.

Despite her ambivalence toward me, I worry about her.  The average lifespan for a toad in the wild is about a year.  She’s been extremely lucky for some five seasons now, somehow avoiding Mr. Herbert No-Shoulders, the huge black rat snake that resides in the same area along with Mrs. No-shoulders and her brood…maybe Toady has just gotten too big to eat.  She is uuuuuuuge!

I found her waiting for me early this morning while I waited for my fifteen-year-old puppy dog to find her spot.  Toady was sitting on her flat rock, but she wasn’t alone.  She had a friend, a friend with benefits I might guess.

At first glance, I thought something was wrong.  She looked deformed.  Was it that bad a winter?  I looked closer and saw what I thought was a deformity was a much smaller toad riding high on her back.  I was reminded of a baby riding on one of his parent’s backs.

I don’t think she was his momma…or maybe she was his “Hot Momma.”  I’ve seen her several times during the day and her suiter is still riding on her back.  She walks, he rides.  Mentally I make a note to look up the range of an American toad…as far as a mile from their breeding sites.  Now I’m Googling their breeding habits.

You can tell this quarantine thing is getting to me.  Combined with sciatica, rainy weather and a sick tractor, I’ve got too much time on my hands…and there is laziness too.

Through research, I found out it is not unusual for the female to carry her suitor to her breeding grounds…the breeding pool of water which I assume is the stream below my home.  For some reason, I thought about frog gigolos, “Hey baby, goin’ my way?  How ‘bout a lift.  What’s your sign?  Can I buy you a drink?”  Louis Prima is singing “Just a Gigolo” in my head.  I guess it could be the David Lee Roth version.  I’m thinking of disco, glitter balls and lime-green leisure suits, colorful, long collared “catch me, f@#$ me” shirts and gold bling. 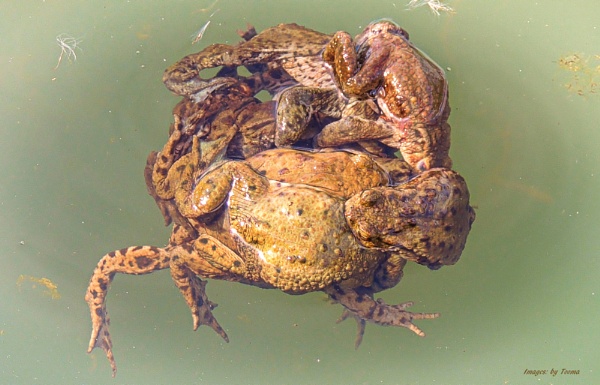 I obviously need more humor injected into my life and something productive to do.  Something is very wrong contemplating the sex life of toads and frogs or as we say here, toad frogs.  Well, it is spring when a “young man’s fancy turns to love” or a young toad’s fancy is to ride around on a big ole’ momma toad waiting for her to make the trek to her egg-laying site.  I just hope she survives her “La danse de l’amour.”  French is such a sexy language…even when describing toads.

Don Miller writes about whatever strikes his fancy.  His author’ page is https://www.amazon.com/Don-Miller/e/B018IT38GM?fbclid=IwAR0Tk_BUmCRpeCR63Kr59dyLywOMUia36e7djQlIDqefkK6aKUYyW9svuK4

The featured and last images are from https://www.ephotozine.com/photo/toad–mating–ball–53338916

The first image is of Toady and her suitor.

I see signs, not those signs.  I see and hear true believers espousing the nearness of the apocalypse; wars, and rumors of wars, national disasters, the anti-Christ, prayers for the rapture.  Those are not the signs of which I speak…mainly because doomsayers have been warning us since the book of Revelations was written, I guess.  The doomsaying is probably warranted but I have hope and believe humanity will come to its senses before we self-destruct.  Regardless, the Earth will continue to make its trips around the Sun whether we are around to enjoy the change in seasons or not.

No, not those signs but signs of changes none-the-less.  Here in the South, it is hotter than forty hells even in the foothills of the Blue Ridge.  Not the pressure cooker heat of the lower Southern states but plenty hot for me.  The heat will continue for the foreseeable future if the weather gurus are to be believed. 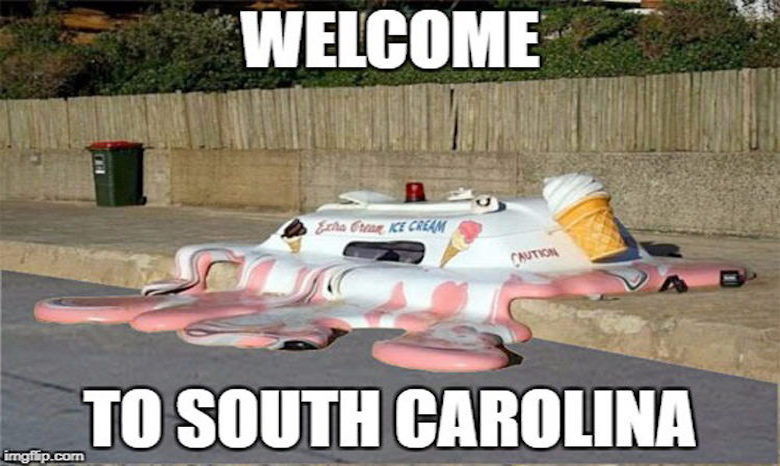 Still, the signs of fall are upon me.  Years ago, I promised I would never protest the heat due to a particularly cold baseball season and my depression which intensifies as the days shorten.  This summer is taxing my promise, but I realized yesterday, the signs are everywhere.  The days are shortening, and dark days of winter will be too soon be upon me.

Many years ago, I noted the change when football practice and school began.  Since my retirement, I monitor the changes in more subtle ways.  The writing spiders spinning their webs, vees of geese flying south, a pair of wood ducks I haven’t seen since spring, bees and butterflies working the remaining blooms as if their very lives depend on it…or upcoming generations lives.  Damn the yellow jackets, the little bastards are working too.

My wild birds have returned to the feeders from the mid-summer break as they fed their young juicy bugs and worms instead of my sunflower seeds.  New birds, small and quick, are flitting hither and yon.  There seems to be a bumper crop of gold and purple finches.  A new generation to enjoy our symbiotic relationship…my viewing enjoyment for their food.  Despite the cost of sunflower seed, it seems to be a fair trade.

The turkeys are on the move too.  Hens followed by Jakes and Jennies and even smaller poults are passing through my backyard.  I didn’t see a Tom but there must be one somewhere…although I didn’t get much of a chance to see.  Despite Mr. Carlson thoughts on WKRP, “Turkeys can fly”…at least wild ones.

I stepped outside last night to partake of one last puff on my cigar…the one I have been nursing all day.  The air was filled with the smell of citronella from the torches I burn to keep the mosquitoes at bay.  I watched the smoke dissipate into the freshening breeze…a breeze that seemed different than the humidity filled breezes from earlier in the day.  There was a hint of fall in it, just an underlying current of cool.  The best sign of all despite my wish not to wish my life away.    Pumpkin pie and ripening persimmons are just around the corner.

If interested, more of Don Miller’s wanderings can be found at https://www.amazon.com/Don-Miller/e/B018IT38GM

The image of geese at sunset is from https://blog.theclymb.com/tips/signs-autumn-northwest-enjoy/

All photographs were legally lifted from Pexels.com.